The literary text of the Mystery of Elche, written in Valencian- with a psalm and some verses in Latin- is relatively short if we compare it with other representations of similar characteristics whose librettos have been preserved to the present day. For example, the assumptionist mystery of Tarragona (14th century) or the play that was held in the Cathedral of Valencia (15th century). The Elche play consists of a total of two hundred and fifty-nine verses, distributed in different kinds of stanzas. The most abundant are quatrains with lines of eight syllables rhyming in the sequence “aabb”, that’s to say, stanzas of the model known as “noves rimades”. There are also, although to a lesser extent, lines of ten syllables, distributed in quatrains with the rhyming pattern “abab”, and also five line verses rhyming “aabb” and “abab”. 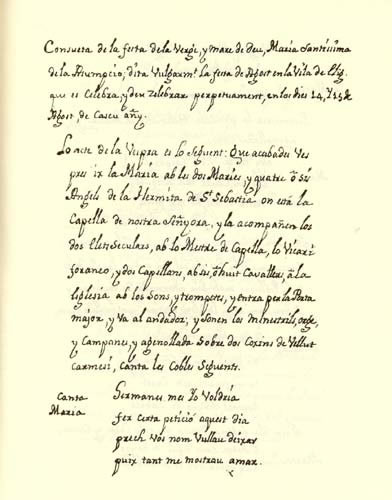 The brevity of the text is perhaps due to the lesser importance that the literary part has been granted through history, in comparison to the musical and scenic part. The complexity of some of the chants, with abundant musical ornaments, and the use of spectacular pieces of aerial stage machinery has led to a reduction of part of the verses, in order to keep the representation to a moderate duration. References preserved show that it was in the 17th century when the literary part of the drama was finally established.

Literary and musical texts, as well as the stage notes that allow the representation of the play, have been preserved throughout the centuries in manuscripts called consuetas. Although some researchers presume the existence of a primitive consueta belonging to the Brotherhood of Our Lady of the Assumption, that was responsible for the staging of the Mystery until 1609, the first precise reference to one of these librettos doesn’t appear until 1625. It was this year when Honorat Martí de Montsí, a knight of the Holy Office in Orihuela, asked Gaspar Soler Chacón, from Elche, a copy of the text of the Festa, probably so the Inquisition could control whether the play observed orthodoxy. It is the “Llibre de la Festa de Nostra Señora de la Sumptió ditta vulgarment la Festa de la vila de Elig, sacada de son original register a instancia del señor Honorat Martí de Montsí, cavaller familiar del Sant Offisi y Capitá per sa Magestat en la ciutat de Oriola”.

Soler Chacón only copied the verses of the chants and the stage notes-but not the music- of the official consueta that was kept by the Council of the village in its “three key ark” or safe. That copy might have only been allowed because it was an order of the Inquisition for, as Soler himself pointed out, the Council never authorized any transcriptions of the consueta because of the “solemnity of the Festa”. On the other hand, the manuscript was enriched with a series of historical side notes, referring to the city and the festivals related with the assumptionist drama, that Soler Chacón himself made. The original manuscript of this consueta of 1625 hasn’t been preserved, but we have notice of it thanks to an edition made by the chronicler of Elche, Pere Ibarra i Ruiz (1858-1934), in 1933.

Book of the Festa of our Lady of the Assumption, popularly known as Festa of the village of Elche, extracted from its original text by Honorat Martí de Montsí knight of the Holy Office and Captain of His Majesty in Orihuela. 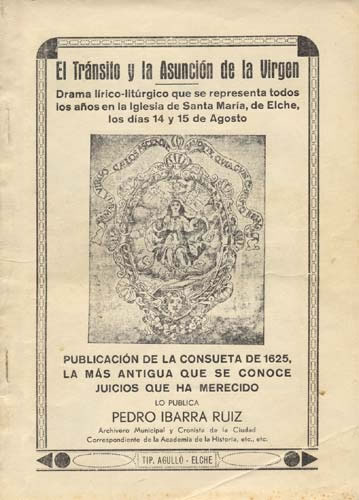 In 1639, an anonymous person- “a devout person”- made a new copy of the official manuscript: “Consueta de la Festa de Nostra Señora de la Assuntió, que se celebra en dos actes, vespra y dia, en la insigne vila de Elig. Escrit per un devot seu en VI dies del mes de febrer del any MDCXXXIX”. This time, the music of the chants was included, as well as side notes with the names of the composers who took part in the polyphonic reform of the Mystery in the 16th century. This copy of the consueta is also known by means of a copy, published in a partial edition by the publisher from Murcia Javier Puentes y Ponte (1830-1903) in 1887.

In 1706, the archive of the Council of Elche was laid waste by the Bourbon troops, during the War of the Spanish Succession. During the incident, the original consueta suffered severe damage. Three years later it was copied by the Beneficiary Joseph Lozano y Roiz so it could be used by the chapel Master or musical conductors of the Mystery. The document is titled “Consueta or guide for the great play on the vespers and the day of the Mother of God of the Assumption, Patron of Elche, for chapel Masters (…) written by the beneficiary Joseph Lozano y Roiz, priest, in the year 1709”. This copy written by Lozano-which includes side notes and both the literary and the musical texts- is the oldest libretto preserved to the present day. It is, besides, the only one belonging to a public institution: The Municipal Historical Archive of Elche. Two facsimile editions of this consueta have been published: one in 1941, paid for by the Spanish Institute and with a preface written by Eugenio d’Ors, and another one in 1986, published by the Regional Valencian Government, with a prologue written by Francesc Massip and M. Carmen Muntané. 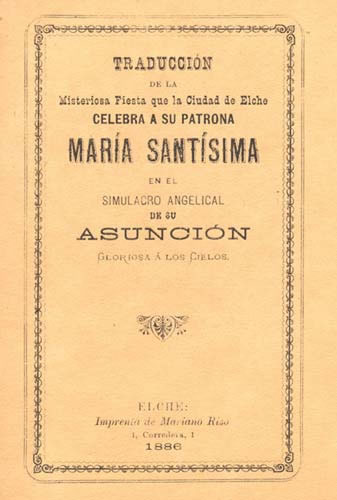 Lozano y Roiz himself made another copy of the consueta in 1722, which turned out almost identical to the previous one, although it is untitled. This copy is kept nowadays in the library of the chronicler of the city Juan Orts Román (1898-1958). In 2002, The Board of the Misteri d’Elx published a facsimile edition of this document, with an introductory study written by the researcher Luis Quirante Santacruz (1959-2000).

The last consueta we have notice of -from a chronological point of view- is dated in 1751. It is a copy made by Carlos Tàrrega I Caro from the above mentioned text of 1625. Its title is Llibre de la Festa de Nostra Senyora de la Assumpció, dita vulgarment la Festa de Agost de la vila de Elig, treta de originals registres antichs... It doesn’t contain, thus, the score of the play, although it includes a serious of notes about events that happened during the representations of the Mystery in the 16th and 17th centuries. These notes are very useful in order to analyze the history and evolution of the assumptionist drama. This consueta is kept in the library of the heirs of the chronicler José M. Ruiz de Lope y Pérez (1831-1900) and it was published in a facsimile edition in 1992 by Manuel Pastor’s editorial in Elche, with a preliminary study by Joan Castaño.

Consueta of the Festa of Our Lady of the Assumption, in two acts, vespers and day, in the illustrious village of Elche. Written by Her devout in six days of the month of February 1639.

Book of the Fiesta of Our Lady of the Assumption, popularly known as August Fiesta of the village of Elche, taken from old original records…