The Mystery of Elche is a cultural treasure of the people of Elche and one of the most outstanding jewels of the valencian cultural heritage, as its pronouncement as National Monument in 1931, and its inclusion, in 2001, in the first Proclamation of Masterpieces of the Oral and Intangible Heritage of Humanity by UNESCO, show.

La Festa, as this play of medieval origin is also known, is represented every year in the Basilica of Saint Mary in Elche in August, in order to celebrate the festivity of the Virgin of the Assumption. On August 14th the first part of the drama, known as the Vespra, is enacted. The second part, the Festa, is on the 15th. Besides, on the 11th, 12th and 13th of August dress rehearsals in which both parts are enacted take place.

On the first day of the Mistery, la Vespra, the Virgin and her escort, made up by Mary Salome and Mary Jacobi and several angels (all of them represented by boys, as the liturgical origin of the drama did not permit the participation of women) enter through the main door of the basilica and ascend along the “andador” (gangway running the whole length of the nave and connecting the “cadafal” or scenario with the main door of the church).

From the dome of the church, which, for the representations of The Mystery is covered with a canvas painted to represent heaven, an angel descends in an artefact called the Pomegranate. This angel (also a boy) announces Mary that her death is near and gives her a golden palm to be taken to her burial.

Following to Virgin’s wishes the apostles (except Saint Thomas) enter the temple ready to aid her in her last moments. After Mary’ death, the boy who plays her part is substituted by the image of the Virgin of the Assumption, patroness of Elche. A new aerial machine, occupied by three adults and two children playing angels, slowly descends to take care of the soul of the Virgin, represented by a little image. The arrival of this choir, called the “Araceli”, to heaven puts an end to the first part of the drama.

The second day of the play, la Festa, starts with the preparation for the burial of Mary. The preparation is interrupted by a group of Jews who want to stop the burial. After a short fight with the apostles, one of the Hebrews tries to touch the body of the Virgin but he is left paralyzed. When they witness this miracle, the Jews are converted and show their faith in the virginity of Mary. Once they are baptized by Saint Peter with the golden palm brought from heaven, they are miraculously cured. Apostles and Jews gather to get ready to perform the burial of Mary, which turns into a solemn procession on the cadafal. Finally, the image of the Virgin will be placed in an opening in the centre of the cadafal, simulating its burial place. 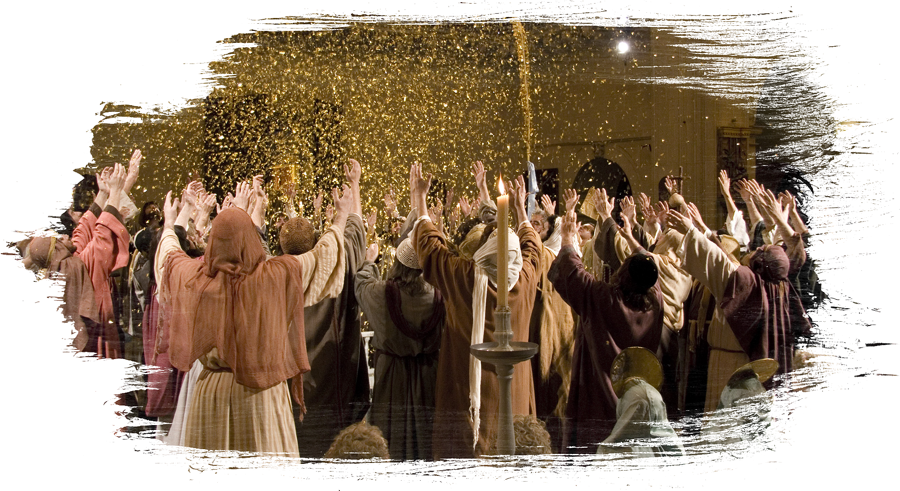 At this precise moment the araceli descends again to allow the reunion of the soul of Mary and her body and take her to heaven resuscitated. The assumption of the Virgin is interrupted by the apostle Saint Thomas, who apologizes for his delay, as he was preaching in the far away India. The heaven is opened again and another aerial artifact, occupied by the Holy Trinity, appears. Then the Eternal Father lets go of the imperial crown on the Virgin’s head. Mary has been crowned as the Queen of all creation. The excited chant fo the Gloria Patri and the applause of the great number of espectatros put an end to the Mystery of Elche.